Welcome to our first edition of “Watch Volta Grow”

Oaks Volta was purchased from Oaks Stud in The Oaks near Sydney in October 2011. Wesley and I saw him advertised and liked his breeding the most and had to take a look at him to see if we thought he would suit our plans. Team Joyce hope to produce a fine  top quality Performance Stallion and stand him at stud. We knew it would be a very long process because of his age but decided maybe this would benefit us greatly as we would be doing all the training from the very early stages ourselves and therefore Volta would know exactly what is expected of him and how we wish him to behave.

Team Joyce went to the Australian Showjumping Championships held at Dubbo in October and on our way back home went via The Oaks to pick up our new edition. Volta loaded quite well as you can imagine his eyes did open very wide when he saw he was walking toward a huge ramp and could vaguely see other horses aboard. LH Brittany, LH Warsaw , LH Beckham and LH Folly were all eager and keen to see who was coming into the last bay. Three people virtually carried him up the ramp and we finally placed him in his spot and shut the divider as quickly as we could and shut the ramp. Now we just hoped he would stand there all the way to Korumburra.

Volta traveled perfectly and off loaded very keenly to say the least. He was very pleased to lay down in his stable and have a roll. He ate his hay and drank his water and seemed to settle very well beside LH Beckham. We decided LH Beckham would be his buddy so by placing  them next to each other we could then create a bond we hope. Over the next week we noticed they had become friends and would nudge each other regularly. When LH Beckham wanted a pat over the stable door Oaks Volta would ask for one to in no time. 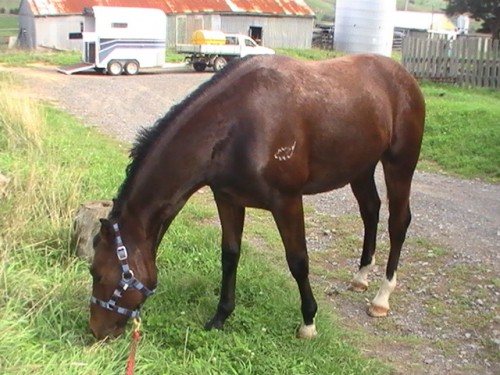 Oaks Volta at his new home in Korumburra

In early November Oaks Volta appeared to have a runny nose and a cough. This stayed with him for at least 3 weeks, we decided this was the climate change , humidity change and general surroundings. We let it take its course and soon enough he was as good as new again. His weight did drop a little but his appetite never did.

At first we cleaned the stable with him in it as he needed to get used to us in there with a rake and the sawdust falling on his legs. He kicked out a little at first but over time he knew the drill. In December Wes started to tie him up while we cleaned his stable so he was used to putting the headstall on and off. Volta is a quick learner and wants to please he loves people and he adores LH Beckham. 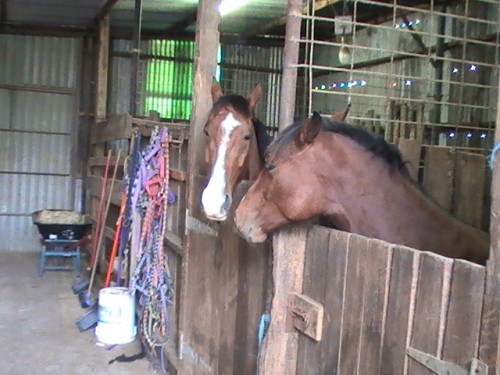 Horse training or retraining is not a lock-step procedure. Horses learn at different rates and some may catch on quickly, while some take much longer. Don’t set a deadline. Horses are very sensitive to body language and mood. If you are in a rush, your horse will feel he must rush too. But he won’t know why you are rushing and his behavior will reflect that.  If your horse is hard to lead spend 15 minutes walking and halting. Don’t ask for anything more. If you have only 30 minutes to ride choose an exercise you can do in only 30 minutes. Save the bigger lessons for when your time is more flexible.

Before you begin plan what you are going to do with your horse. Have all the equipment you’ll need handy. Plan your time so you can work uninterrupted. You will have a difficult time teaching if you give your horse only part of your attention. You’ll confuse him if you try to teach him while telling the dog to go lie down, talking to another person or running off to fetch a piece of equipment. Be well organised. Only by re-enforcing good behavior will you eventually replace the unwanted behavior. Let every training session end with a success, no matter how small.

Your horse shouldn’t pull you, barge ahead, hang back or push into you. Teaching your horse to lead properly is the basis for almost every other aspect of good ground manners.

What you need to teach a horse to lead:

Safe working area such as a ring or arena.

Lots of time and patience.

In April Volta will have a wash and take a trip in the float and have more leading and some free jumping experience. Stay tuned for up loaded footage and have a guess what his weight will be by the 1st May to win great prizes.