It has been quite an interesting few weeks for Team Joyce, finding out how our passed ponies are going and where they have been. It was wonderful to hear from people who have read our blogs on Equestrian Life . We bring you some quick updates on two ponies we used to own and it just so happens one was Sarah’s and one was Tiffany’s.

Tiffany & Dodge many years ago

Lets start with Tiffany’s old faithful amazing everything pony Dodge. Tiffany’s grand father Bill Joyce  brought Dodge as a 2 year old Welsh Cob registered gelding. He was only broken to cart and Bill was happy to use him for going around the dairy farm watching the girls ride. They would come along while the girls got the milking cows up after school and jumped logs and ditches on the way. Dodge was even used to pick up the girls from the school bus. One day Dodge showed his talent by jumping out of a very high fence to be with his friends. Wes decided to break him in as a 4 year old and see if he would suit Tiffany for a Pony Club mount. This idea turned out better than we could have expected because Dodge was not just good he was brilliant! He was used for everything. Showing ~ Eventing ~ Games ~ Combined Training ~ and his forte was Showjumping, he was very careful and scopey. Tiffany had a terrific time because he was the pony that gave her enormous joy and fun in every way, he even swam in the dam in summer! 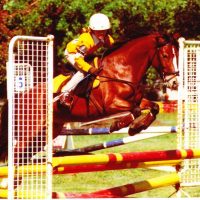 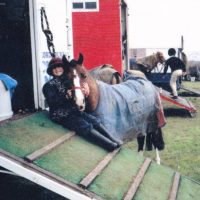 Tiffany cuddling her Dodge at the Maffra Ag show 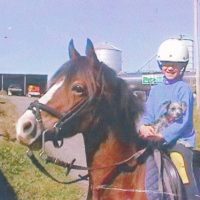 Tiffany on Dodge holding Milly the poodle on the farm 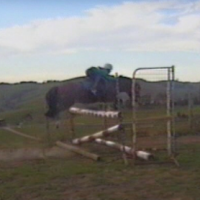 Tiffany and Dodge in 1999 loving to jump! 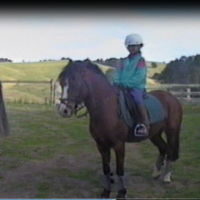 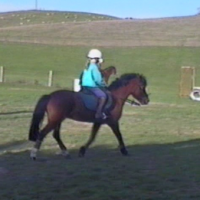 Where is Dodge now at aged 19 years?

We purchased Dodge in the early months of 2010 for my 7 year old daughter, I saw him advertised in Horse Deals contacted Annette Harding, they did a great video of him and we bought him. It was a huge gamble as we bought him sight unseen from Victoria and had him transported to us in Cairns. He has been the best all round pony, my daughter is now 10 and has competed at State level in Showjumping, Equitation, Dressage and Combined Training, placing 6th overall in Dressage and 2nd in Combined Training this year.

Dodge has won numerous High Point Rider awards at Gymkhanas and many Best Presented awards, he has been Reserve Champion Hunter Pony for the last 2 years at Cairns Ag Show, also taken his rider to many Champion Rider wins. My 10 year old is now moving onto a bigger pony and my 7 year old will now be moving onto him, turning 19 this year he has been there done that. 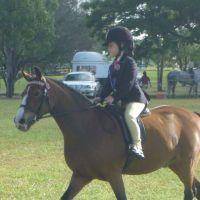 Dodge and Jamie at their very first outing! 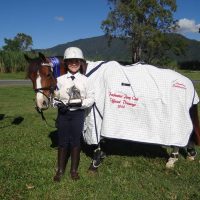 Dodge and Jamie Hewitt winners of the High Point in Dressage 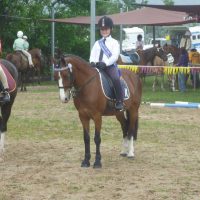 Dodge and Jamie having another great day out. 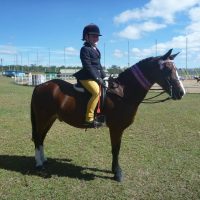 Sarah & Tonto many years ago

Sarah used to ride a Galloway called Tonto. Team Joyce purchased him from Jenny Walker and he was exactly what we were looking for at the time because Sarah was moving from a pony to a Galloway and was hoping to get to the PCAVState Showjumping Titles in C Grade when she was 11years old, and yes Tonto made it there and the two performed extremely well and placed in every event and the Zone Team placed highly. Tonto was again very willing to do all the Pony Club activities and loved going into the dam as well,he seemed to find muddy dirty spots and loved being messy! 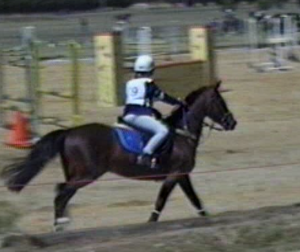 Where is Tonto now at aged 20 years?

I was reading your latest blog on Equestrian Life and I saw that you made mention to a little Lals Haven pony called Tonto! And it just so happened that we bought him 5 years ago and thought you might like to hear about how the little devil is going! We bought him off the Laidlaw family in Ararat in 2008 and it was the best thing we ever did!!  He always had the funniest personality which I think is why I fell in love with him. Tonto is now retired at rising 20 and is the naughtiest pony on the property (As well as the fattest and muddiest!) He was such an amazing little pony- he took me from grade 5/4 rider to a competent grade 3/2 rider and  and we always placed top 10! He has given me some of the best rides I have ever had!  He constantly makes me laugh and he has the absolute best personality and is without doubt the best little pony I have ever ridden!

Without doubt though his favourite part of it all was the cross country! He was a little pocket rocket and even though we may have looked a tad out of control I always felt incredibly safe and always had a ball. It was so funny because in the XC warm up he’d be so lazy but then he’d suddenly spark up when he got into the start box and was raring to go! Similarly in the show jumping, he always knew when it was his time to shine and he’d start to spark up and show off!! In show jumping lessons at home he was so much fun as he used his legs as springs to get me over 1m high jumps and constantly showed up the bigger horses.

Unfortunately in 2011, he became lame due to a bone spur in his fetlock. We injected it with special lubricants to prevent it from hurting him and so we could finish him on a good note – which we did! We did an intro at the Werribee fundraiser event and he felt as good as ever!

He is now retired with my sisters 26 year old Arab who is now his best friend! And Tonto certainly uses his age as an excuse to be naughty! He is always looking for a way to escape and get to the greener grass on the other side of the fence! And whenever we move them into a new paddock he is the first to go charging around and explore it!

It is always nice to hear about previous horses or ponies and after reading your blog I thought I’d email you to tell you how special and amazing he is!

Thank you for breeding such an amazing little man with the biggest personality! 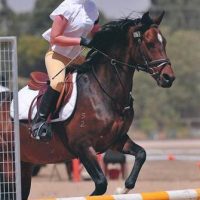 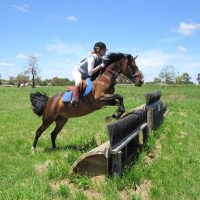 Tonto in the Cross-country 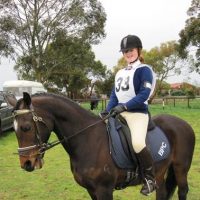 Tonto and Kirsten at a Pony Club comeptition 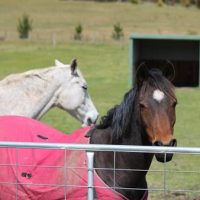 Tonto in his paddock

Thank you Christine and Kirsten for sending us all the latest news on these two wonderful ponies/galloways. We love to know where they are and what they have been doing with new owners! Enjoy you riding and all the best!!!