At the age of fourteen I am lucky enough to co-own L.H. Priscilla! She is a beautiful grey mare who is four years old and constantly fought over in our horse-sharing (or stealing) family.

L.H. Priscilla (Bella) is a ‘super cute’ mare who tries very hard and is lots of fun to ride! She is a spooky horse and this creates a HUGE jump!

She has the most gorgeous temperament. She is gentle and affectionate and loves cuddles. She tries her hardest, and when she is scared she puts her trust in you, and just jumps!

Bella is very capable in showjumping and eventing. She has performed very well in both so far.

She won her first one day event at Rosedale in Grade Five level, when she had just turned four. This was after producing a cute dressage test and was double clear in showjumping and cross-country!

She then competed at Corner Inlet Pony Club Showjumping Day in E Grade and won Reserve Champion. This was after she won her first round, was fourth in her second round and second in her last round.

She was then accidentally entered into the Grade Three section for the Victorian Interzones Championships Horse Trials. So, in preparation we entered her in the Bacchus Marsh Horse Trials in the Grade Three section. ‘Bella’ stepped up to the challenge and, after the Dressage test she was placed midfield. She went on to complete double clear cross-country and show jumping which included jumping a big roll top and drop into the water. This catapulted us up the leader board and into fourth position.

She went to Werribee for the Interzones Horse Trials and completed a nice dressage test placing midfield. She went through the cross-country easily and completed the three part water jump and trakenher easily.

As Bella stepped forward to enter the indoor showjumping arena a horse cantered right past her nose!! She got out of there quick fast!! She entered the ring led by my mum… it was VERY scary! However, after becoming more relaxed Bella only had enough time to jump one practice fence before doing her round. She began her round and she was TERRIFIED!! However, she trusted me and when I told her to jump, she jumped!

‘Bella’ has since competed in the Loch-Nyora junior show jumping day in D Grade. She won her first round, was third in her second round, and had an unfortunate rail in her last round.

Bella is unfazed by ditches and actually seems to like them! She doesn’t mind water but thinks it can be scary, it seems to have an ‘ENTER WITH CAUTION’ sign on it, but she always goes straight in!

I love L.H. Priscilla because she is an excellent performer and most of all affectionate and gentle! 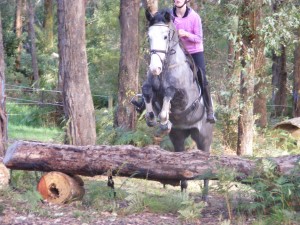 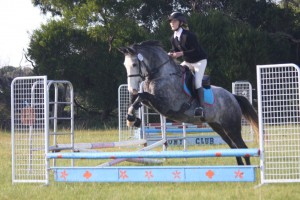