What happened in the past 10 days? It has been tough , poor Volta!.

It shows you that even when you give an animal every bit of tender loving care and attention every day things can still go wrong. We first noticed a runny nose with clear mucus and a sneeze every now and then. The next day he was very quiet and not his normal excitable self, he was not eating all his feed he only nibbled at it and then lay in the middle of his stable sleeping most of the time. Team Joyce decided that for sure he had a cold but how bad was it? Irish Ace beside him had no symptoms at all and neither did LH Brittany who is beside Irish Ace. LH King Arthur and LH Beckham opposite them also showed no signs of a cold. Only Volta was a little out of sorts. The sneezing has stopped now and he has no mucus coming from his nose, that took about 5 days to clear up. We kept him warm and rugged up in the stable and made sure he was drinking water everyday. We are able to monitor his water intake because we do not have automatic drinkers in our stables. We have a large plastic drum and we hand fill it to a certain level everyday so we can closely observe the amount of water each horse drinks everyday. Volta grazed on hay really for the 9 days and did not eat a lot of hard feed at all. Even now he is not back into eating his full feeds twice a day, but he is slowly improving. We guess it will take another 2 weeks before he is feeling and eating what he was 2 weeks prior to getting the cold and the abscess.

On the third day we noticed some wet patch under his chin. Looking very closely at this area Wes noticed an abscess! Oh wow where did this come from? Wes cut all the hair away from this horrible looking sore and we quickly cleaned it as best we could with some antiseptic wash we have on hand. Volta was so well behaved I think he knew we were trying to help him. I did not take pictures of it at its best because it was quite messy and I thought you would not appreciate yucky pictures, so many go “Oh look that’s just awful”, so I took a picture of it closing up and healing and now of it today. It has now almost healed and his hair is starting to grow back nicely again. Why did this abscess appear? We do not know if you have an idea we would love your input” just write a comment below in the comments box. 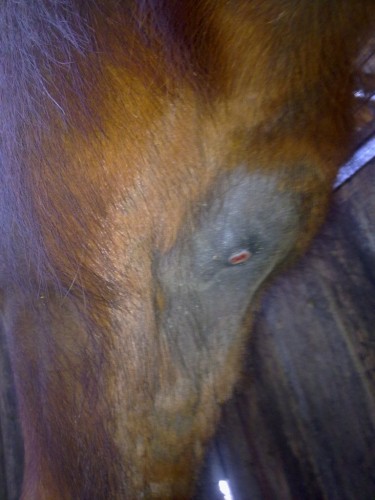 The abscess is just starting to heal. 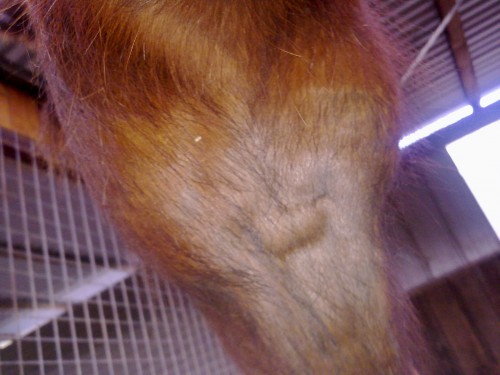 Due to all these dramas for the passed 10 days Volta may take a few weeks to be back to his normal BOUNCY self. He is out in the paddock today as the sun is shinning and the grass is just starting to grow. The mud is even drying up.Will this effect his measurements and weight? Stay tuned for his results Team Joyce are very keen to see what Volta is for August. In September we shall introduce a NEW measurement…..