Deal or No Deal for Team Joyce tonight! 3rd Oct

Team Joyce were contestants on the Deal or No Deal show. It was so much fun we recommend it for everyone to try! What a day in the studio better known as the “Dealadrome” with a group of enthusiastic excitable people.We arrived by 8am with 250 other keen nervous people waiting to see how it all works. Team Joyce had never been inside a showroom for television and the atmosphere inside is electrifying to say the least. The music they played regularly really keeps everyone on their toes and dancing in their seats. Wes, Sarah and myself were placed in Block 3 and we watched 3 other contestants play the game before lunch. After  a delicious lunch provided by Channel 7 people were ushered back the their seats. “Then before we knew it and in total shock they called up Block 3, and called out “The next contestants are Team Joyce”. I was in total disbelief and Wes hugged Sarah and I both with sheer happiness. Up we went to start the competition.

All 3 of us were able to play. From here on it was just so full on and so much fun. Time flew and the laughs were loud and clear, Andrew is so witty and so entertaining he is the host of all times.  We had a ball right up to the the bitter end hoping we would get the bonus $500 for the correct guess. I played an interesting game and I can say my dream of going home with hundreds of thousands never left my mind and my spirits were never squashed, talking with Andrew  making jokes and laughing all the way through the game kept me occupied until the last case was revealed.

Were we winners, DEALERS or losers, NO DEALERS??

The only sad part was not having part 4 of Team Joyce there with us. Tiffany had to attend University on our audition day but before and after our day on television we rang her to keep her up to date with our results.

Thank you once again to all the floor crew who made our day a once in a lifetime experience one Team Joyce shall never forget!

Watch Deal or No Deal Wednesday 3rd October at 5.30pm on Channel 7 to see the outcome! 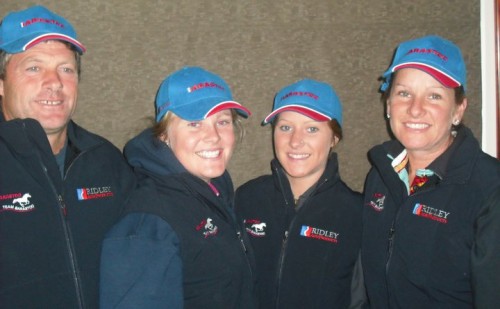 Team Joyce proudly sponsored by Barastoc and The Joint Formula