Team Joyce had a lovely weekend at Land Lang. The showjumping grounds looked fabulous; the committee have done a super job in spending plenty of time on the surface and surrounds. The jumping equipment was all freshly painted and made the whole arena look immaculate. Wes drove the Beast down just for Tiffany’s LH Johnny as he does not have anything started yet to take to shows now that our LH King Arthur is gone. It felt very strange loading only one horse so we do have our work cut out for us to find and produce a new team. Wes was still riding though, he was to ride the three horses owned by Ian and Pat Mouser. Ulouve B Z, Bolero de la Vie and For Fly Hendenlaan Z. Wes has ridden the two Ulouve and Bolereo with great success since his very first start back in November 2013, but Fly had been previously ridden by Rebecca Lawson but due to a minor injury is just having this show off. 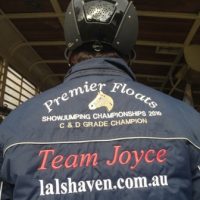 Wes with his new Casco hat on proudly sponsored by Horseland 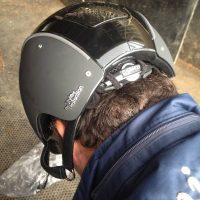 The weather turned cold and wet, lots of drizzle and tiny bit slippery but Tiffany and her little man were to ride first in the Cranbourne Mowers Open 1.05m. David Sheppard had built a really nice open good flowing course and the pair looked very classical. They produced a wonderful cool calm clean round and were to go in the jump off with 25 others. Wes and Fly also jumped a nice clean round so the two were going up against each other. Tiffany was number 8 in the jump off and again executed another nice clean round, not going to fast just forward. Wes then went on Fly later in the draw and had a crack and jumped clean. At the end Wes placed 3rd and Tiffany placed 6th, it was so lovely to see Dad and daughter in the line-up. 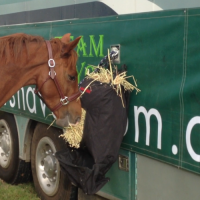 LH Johnny eating his hay out of the Barastoc haybag 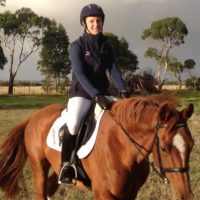 LH Johnny off to the warm up ring 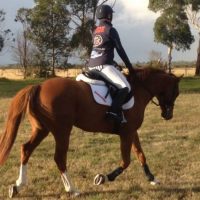 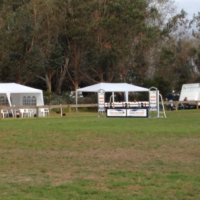 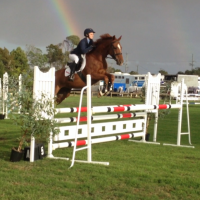 LH Johnny and Tiffany on course 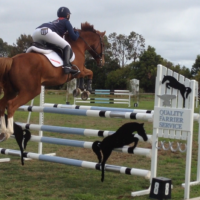 LH Johnny in the jump off 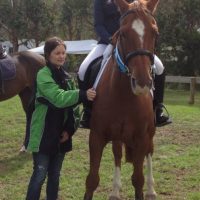 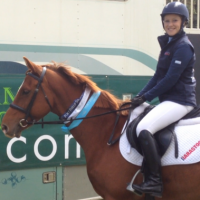 The next class was the Horse Barn 1.20m and Wes rode Bolero and Fly in this one. Bolero went first and he was feeling very fresh let’s not forget Wes rode him back at Sale which was one month ago now and with no one else really riding them you have to expect the freshness.  Bolero was not going to touch a fence he absolutely loved the work and jumping the jumps, he just chewed up the course and cleanly to! Fly seemed a bit sapped he jumped great with just one down but he had done enough. Bolero came back for the jump off and again jumped clean but was not quick enough for the placing’s. 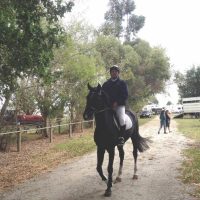 Wes and Fly going to warm up 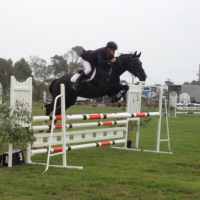 Wes and Fly on course

Now for the main class the Premier Floats 1.30m and Ulouve was to have her turn. She was also feeling very vibrant and warmed up super’, what a great mare. She jumped so well and had one rail on course just seemed to look at the dazzle a bit too long it just caught her eye, no problem at all just tapped the rail. Very nice up and coming performance horse!!

The last class of the day was the South Eastern Equine Hospital & Martin Alomes 1.10m and Tiffany tacked up her LH Johnny and it was very late in the afternoon. Waiting all day just for the second jump at 5.15pm was a tough ask for a young horse. Anyway Johnny was a trooper he jumped well and had one rail. It was great to load up and come home after a long day of hot and cold weather it did not know what it wanted to be today. One minute you had your warm coat on in drizzle rain and then sun hat in warm sunshine!! We are driving the car back tomorrow as Tiffany is planning on studying  and Wes’s rides are camped at the show. 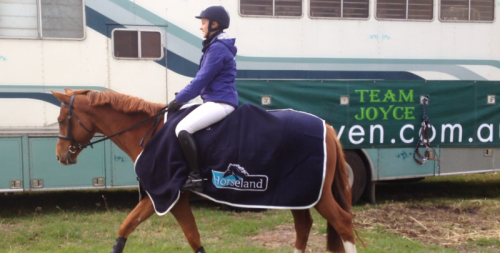 LH Johnny showing off his new sponsored rug from Horseland

Team Joyce went back on the Sunday without any horses and it felt very strange trying to pack the ute with riding clothes for Wes. We arrived in time to watch Jess on LH Folly and they went really well. Then Wes rode Ulove B Z and Bolero de la Vie Z in the Open Farmhand 1.35m Championship. Bolero went first and when we went to saddle him up he seemed out of sorts, he was not so pleased to be saddled and he had a few bites on his neck from Fly so we think the two must have fought last night sometime over the yards. Anyway Wes warmed him up and he seemed ok but as soon as he rode in the arena Bolero looked stiff in the canter. Wes approached the first fence and it looked like a struggle to get straight and over it, then the second third fence looked very un-comfortable. When number five a came up he stopped at five b, Wes patted him and  jumped number one and left the course. Having a chat when un-saddling he thinks today was not Bolero’s day, he was obviously not himself. We will try again at the next show . Ulovey B Z jumped amazingly well and had just the very last fence down number twelve. Wes felt she was loving the jumping and he is very excited about taking her to another day out. 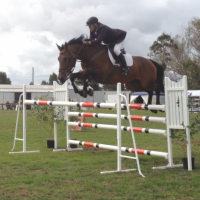 Wes and Ulovey on course 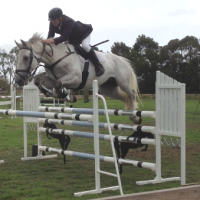 Wes and Bolero on course

The last class of the day for us was the Ponderosa Young Horse Championship ~ under 40 points and Wes rode For Fly Heldenlaan Z. He too seemed to be feeling wonderful and jumped with confidence, much better than yesterday. Wes felt he could travel at a much better more forward pace and having one rail down did not deter our feelings of excitement. That’s our show done and dusted, over both days we had one rail in every class and that’s all it takes to be out of the running but it’s good to strive for those clear rounds and have that burning feeling to want to achieve them. Next time we shall try again we shall succeed!

Oh congratulations Jess Hurley on placing 4th on LH Folly in the last class of the day!

Off to Boneo Park, Red Hill show on the 5th and 6th April see you there!!