It was 1995 when the Australian Showjumping Championships were held in Victoria last so to have them here at Werribee Park was fabulous!. Team Joyce only took 3 horses, LH Beckham, LH King Arthur and LH Brittany. We arrived on Wednesday night and to our delight were very impressed with all the set up. The jumping and warm up arenas were so big and so colourful , the jumping equipment looked very flash. There was a huge big television screen on the edge of the arena and alongside that were many marquee tents for all the retailers advertising merchandise. The organisers have done an amazing job in producing a top quality event right here in Melbourne. There was also a riders and VIP tent for people to go into to watch all the action. Competitors were camped all over the grounds and not only were all the outside yards full but the permanent and 100 extra portable stables were all FULL as well!! This gives one an idea of how many competition horses were competing over the 4 days participating in top quality jumping. Riders from all over Australia made the trek to Melbourne to try and win the prestigious  classes ranging from 90cm up to 1.50m in heights and Juniors up to Senior levels. So the program catered for a large array of standards making sure everyone could come along and participate if they wanted to be apart of a grand event like the Australian Championships. 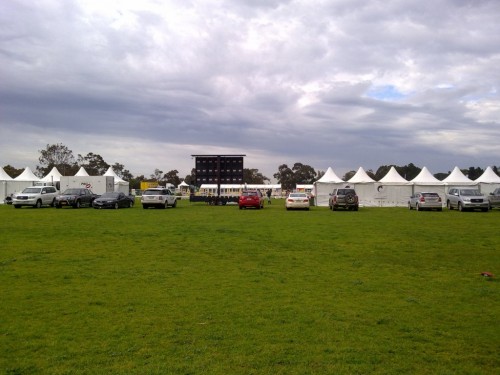 View from our truck 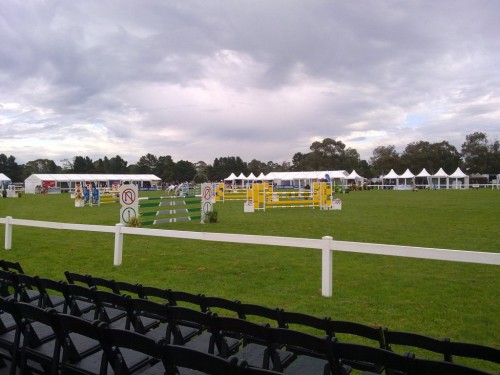 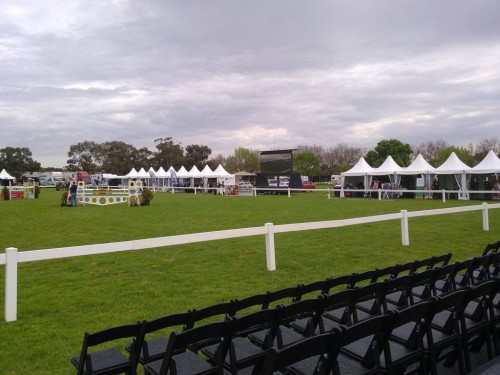 The big screen in Arena 1 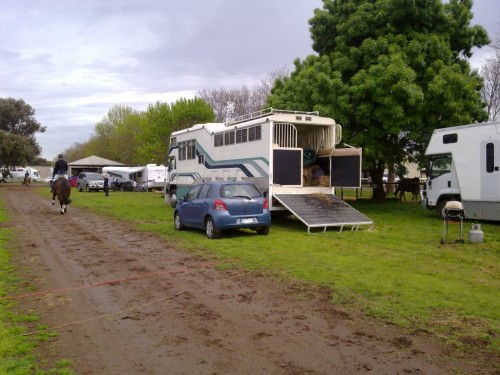 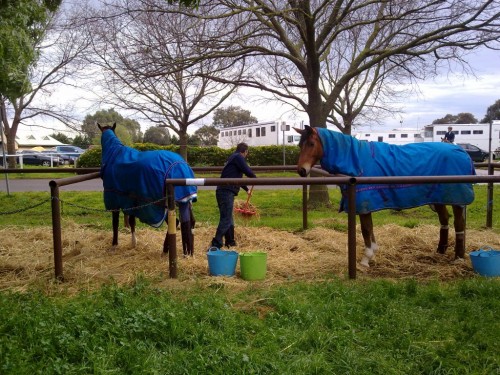 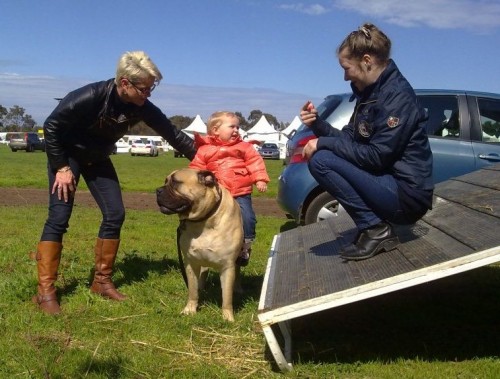 Left: Heidi and Indy sitting on Monkey and Tiffany 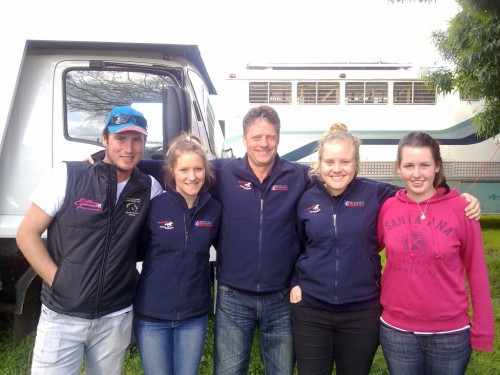 Now as for Team Joyce and how we performed at this show, well on a scale of placing or winning a class we did neither.But as for individual or personal success we feel we achieved this. Sometimes success does not always come in the shape of a win or placing in an event , it can also be a personal achievement in a way of something you hoped would improve or develop. We entered LH Beckham and LH King Arthur in a class called The Future Stars and LH Beckham was to be ridden first in the draw at number 25 and LH King Arthur at 51. This course was set at about 1.30m and with widths of 1.25m, so quite a good sized course for all young up and coming horses. Wes warmed up LH Beckham with plenty of spare time and he looked and felt great. On course Wes feels he was not quite travelling quick enough for the first 3 fences and at number 4 , a triple bar LH Beckham stopped, they re-approached and had another stop which means Elimination. After having a chat Wes felt Beckham was flustered and not confident. So we then saddled up King Arthur , he to warmed up good and with him only being a D Grader we just hoped he would feel confident and get around the course from start to finish. To our delight and personal success he did just that and more. Wes was so happy with him, yes he looked green on course but he did not have a rail. They did have a run out at fence 3 which spooked Arthur a little but on a re-approach jumped it with ease. We were so pleased with these results, Arthur showed alot of potential and proved he just needs time and more experience to learn that he does not need to be afraid of brown horse heads on wings which is why he ran out!

Tiffany then took LH Brittany in the Open 1.20m and we decided that because we had spare time we would plait her up and make her look really pretty for her class. Tiffany and Brittany looked so appealing and because the sun shone the glitter spray made her tail glisten! Unfortunately they had 2 rails down, Tiffany said she felt quite fresh and did run a little at some of the jumps but thought doing another round tomorrow will be a lot better. Watching Brittany closely we did decide she was not to keen on the braided tail nor the plaited mane. She was swishing her tail a lot and shaking her head and sometimes looked agitated, so we think the idea of making her look pretty was fun but it was not what Brittany thought was ideal. 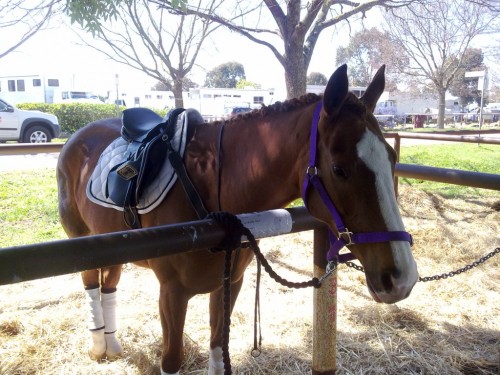 LH Brittany waiting patiently in the shade, all pretty 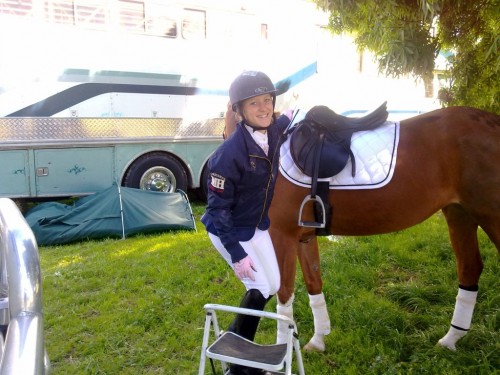 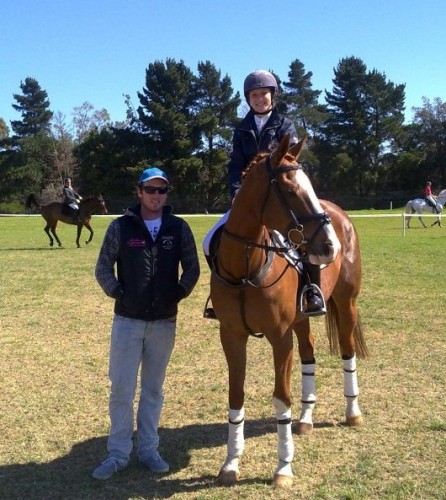 Jordan waiting with Tiffany for her turn to jump

On the Sunday Tiffany and LH Brittany attempted the 1.20m Open, we did not plait her today and the pair jumped a lovely round with only 1 rail down. Brittany was smooth and relaxed, not having all the braids and plaits made her smile from cheek to cheek! 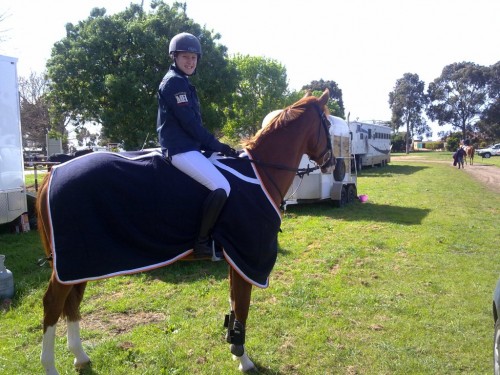 No plaits for today!

It was a great show and we hope the Australian Showjumping Championships return next year in Victoria. 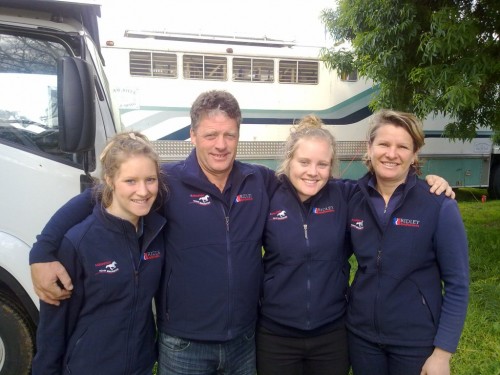