All the way from USA with Harley & Zoe Brown .

29 June 2018/Comments Off on All the way from USA with Harley & Zoe Brown ./Homepage feature, Team Joyce news

Team Joyce were very fortunate to catch up with long time friend Harley Brown. Wes has known Harley since they were teenagers competing against one another in the showjumping ring. They had not caught up for many years so while we were travelling we stopped by to catch up on his life with his family in the USA.

All the way from USA with Harley & Zoe Brown

I always knew while we were on holidays Wes would need to have his horse fix some where. Tyron Equestrian Centre was fabulous and a real eye opener but personally catching up with Harley and his lovely 12 year old daughter Zoe really was a highlight of our trip. We drove our camper into Redwood City on a Monday afternoon eager to observe how the city / horsey people fulfill there passion of showjumping horses in USA. It is a little different to what we do in Australia. 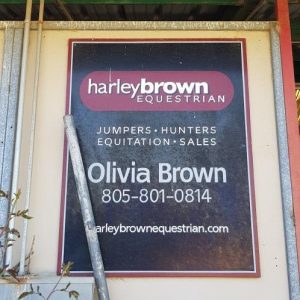 Ok so the Brown family consists of six , Harley Olivia, Zoe & 7 year old Dexter plus 2 adorable small dogs Shaggy & Princess ( I will let you decide which child owned which dog lol ) all living in Redwood City the wealthiest area in San Francisco. It is a beautiful area all the homes in this district are very nice. They drive a short distance 6 days a week to attend the 40 horses in his stable block called a barn. Let me explain how this works. Harley Brown Equestrian rent stables, trotting tack , own riding / arena with jumps and an area for parking his three goosenecks and cars.

Harley & Olivia have many owners and pupils who agist their horses in his barn. They are both very busy instructing during the week and at events. Then they transport all these horses to and from shows. Can you imagine how much organizing it takes to get everybodies horses & tack safely everywhere. I think its a massive responsibility, they are doing it well as you can see becasue they have over 30 horses all owned by other people. Just a snip-it of how things are done over there.

At the front entrance you see a large board with a few signs naming all the people running a huge stable lot at this property. Harley & Olivia have really established a state of the art Equestrian business. All credit to both of them coming from Australia in 2003 creating a comfortable lifestyle through team work dedication long hours and continuous hard work. They own a few houses which make it easier when they travel longer distances to events. They have comfortable accommodation at every show. 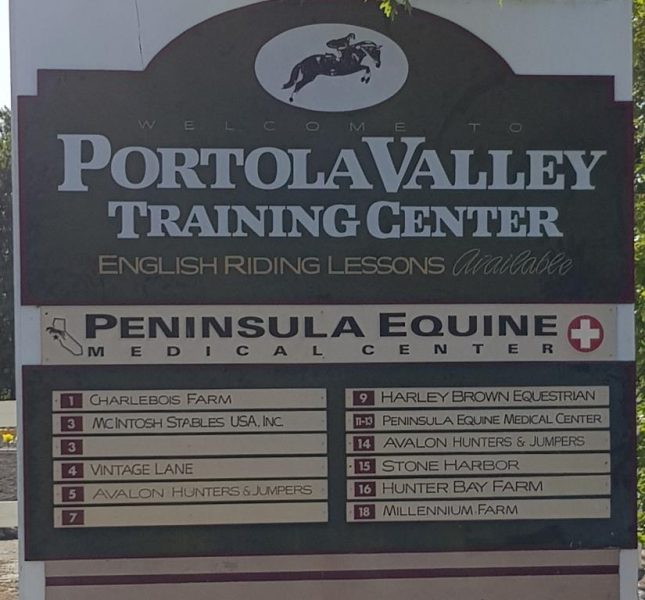 Names of the stable hirers on this property

We were chaperoned thru the 40 horses in the Brown’s stable block all standing very relaxed by the fans at the front of each stable. Monday’s were the day off for the horses which made our visit perfect timing for the tour. We saw a walker at the end which was used every day. So the ritual goes : Fed, cleaned by grooms , tacked up and ridden by Harley & Zoe and or clients if they were coming that day. Fed again at lunch on the walker in the afternoon and dinner that evening. No horses had rugs on the during the day but at night it became quite chilly so all 40 horses were rugged up by the grooms. Every stable had a box out the front which contained personalized tack for the horse in the stable. 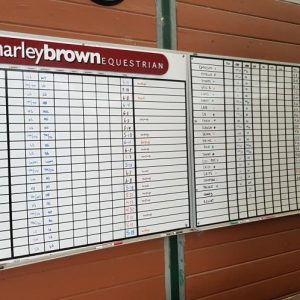 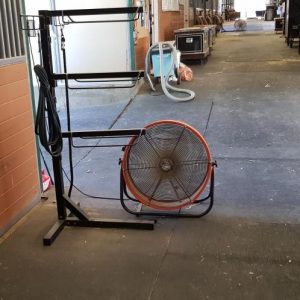 Every stable has its very own fan and many Isle fans 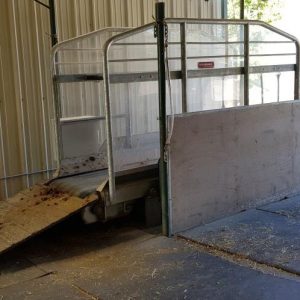 Every horse has its very own tack box out the front of its stable. Each box contains the personalised tack for that horse. 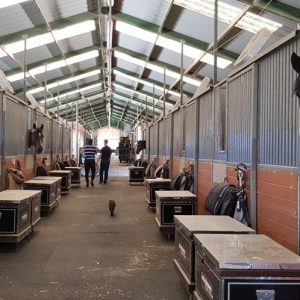 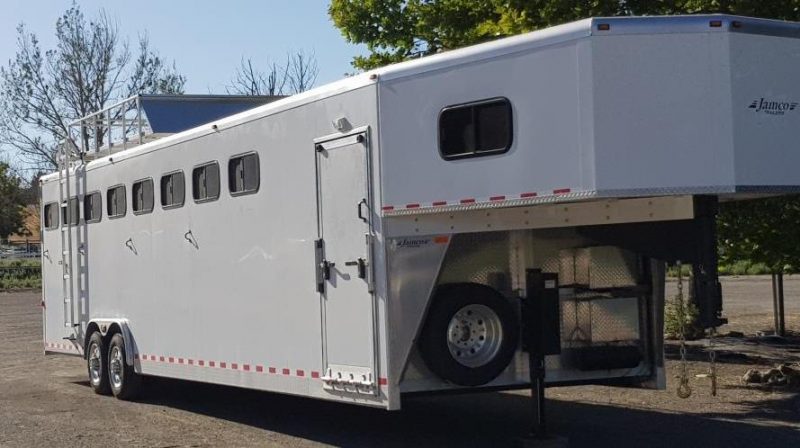 One of 3 Harley Brown transport 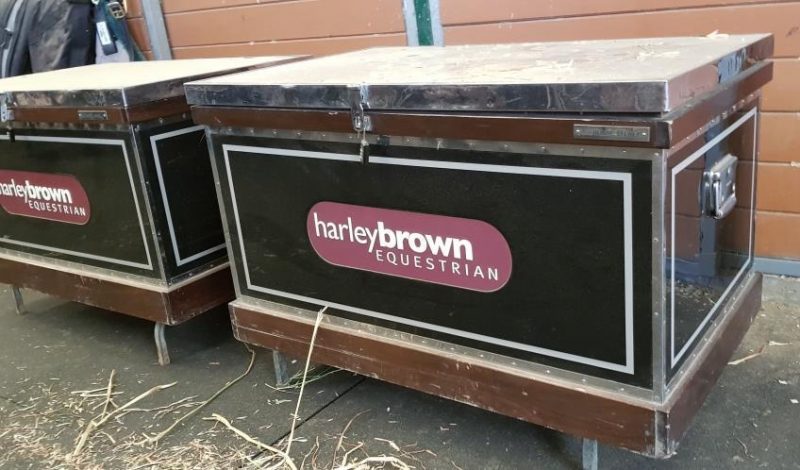 Every horse has its very own tack box out the front of its stable. Each box contains the personalised tack for that horse.

Zoe Brown winning accolades where ever she goes

Wes & I always wanted to visit Cassiato in the flesh. This was Harley’s Grand Prix supa-star. They have had their name up in lights all over the city advertising so many huge wins competing in massive classes. Cassiato is now ridden by his very talented daughter Zoe. She is so driven to ride plus her dream to become a full time showjump rider is there for the taking. Having parents that ride themselves with so much success , also spending quality time installing all their knowledge into Zoe it is sure to be a win win for all.  I have seen so much footage of this combination and it really has the WOW factor. Going by her results and mindset we would say it’s a given that her name shall appear up in lights just like Harley’s in no time. Zoe has her own Instagram page so look for yourself she is an absolute legend for her age. At this stage Dexter is not so keen but who knows after observing Zoe he to may catch the bug and want to ride as well. 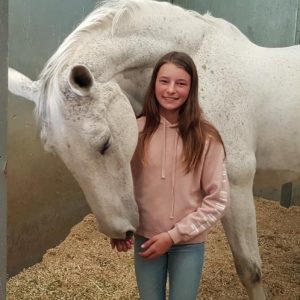 Zoe and her fav Cassiato making a name for themselves 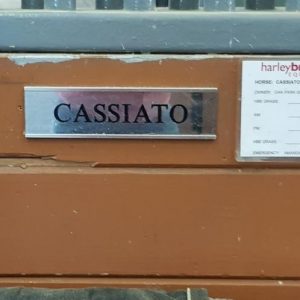 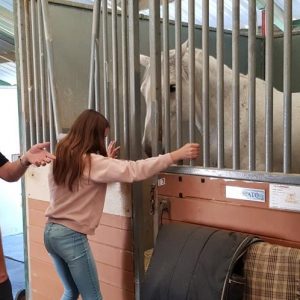 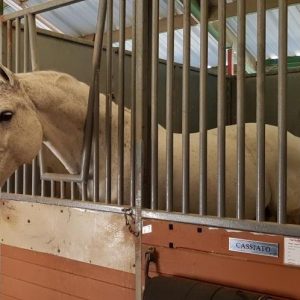 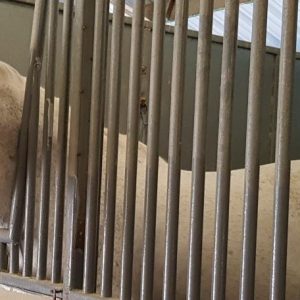 Harley talked alot about Olivia, she was not present while we were there as she had taken the younger son Dexter and was working on one of the houses they owned. See still hard at it to keep it all going. He mentioned just how great she was and how he could not have what he has without her constant support willingness to succeed. He said he always wanted to live well , from our eyes he is living the life we all dream of. All credit to both of them.

Wow what a professional establishment. So great to finally catch up and see you Harley. What you and Olivia have created is remarkable. A beautiful family and a very warm friendly & extremely successful enterprise. We are in awe of what you have achieved from pure dedication and great team work. Thank you for having us